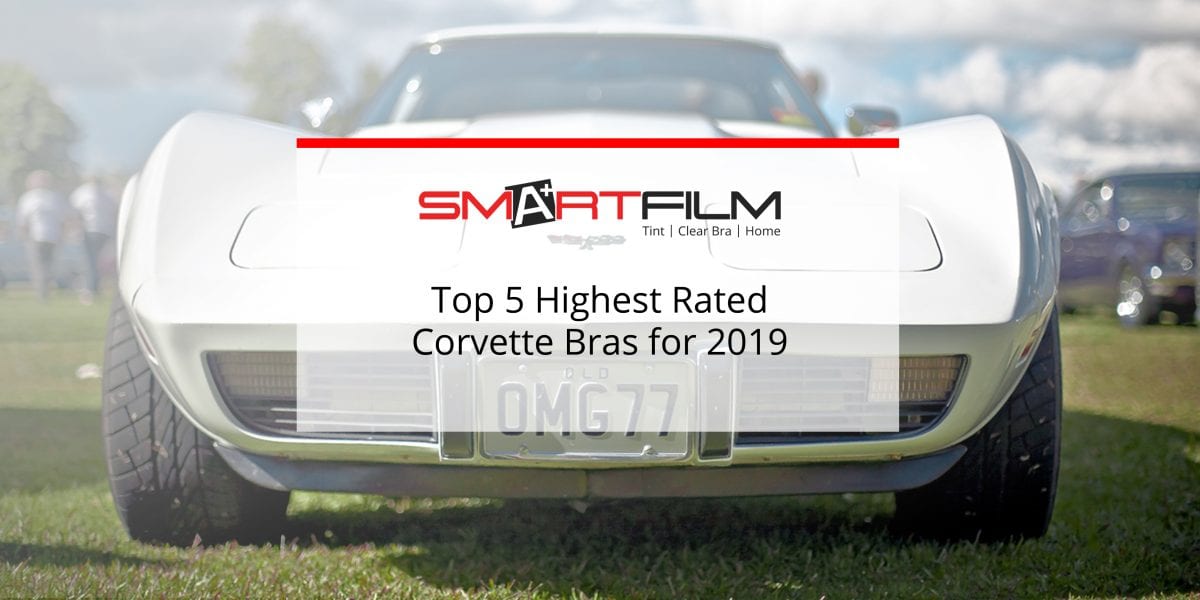 You love your Corvette. Nothing beats driving down the open road with the purr of the engine rumbling up through the steering wheel. But because your car is so important to you, you’ll do anything you can to protect it from unsightly scratches, dings, and paint fade. Installing a Corvette bra is a great way to protect the most vulnerable part of your vehicle: the nose.

There are tons of films on the market these days, and finding the best can be a challenge. Here are a few of the top films we believe offer the best bra for Corvettes.

XPEL created a high-quality self-healing Corvette bra that’s ideal for even the most diehard Corvette enthusiasts. The self-healing film is uniquely resistant to scratches. But what makes it unique is its ability to patch scratches on the surface of the film.

As the film heats up in the sun, the material spreads and as it cools, it adheres to itself. Minor scratches (those that don’t reach the paint) will be gone in a matter of hours. And it works without hurting the integrity of the film itself.
XPEL Corvette front bras are long-lasting, but they’re not invincible. They can and will get damaged if the debris flying up off the road is big enough. But they do come with a 10-year warranty, giving you superior worry-free protection.

Llumar films are some of our favorites. The company creates wonderful tinting and paint protection films, but their clear bras stand out from the rest of their line.

The film itself is almost completely clear once applied and it withstands the Arizona sun incredibly well. This means you won’t see any bubbling or yellowing of your Corvette bra even years down the line.

Like the XPEL films, Llumar’s clear bras are self-healing, preserving your paint job for years without maintenance. But you do pay a premium for premium protection. Think of it as an investment in your Corvette’s future. The longer the film lasts, the less you’ll have to worry about dings and scratches marring your paint job.

Best of all, Llumar clear bras can be washed and waxed just like the rest of your car’s paint. It won’t get cloudy or lose its protective coating even after repeat washes. At SmartFilm, we think it’s the best bra for Corvettes around.

3M films sit firmly in the middle of the range. They’re affordable and last relatively long and, like XPEL and Llumar, they offer self-healing technology. But they’re a bit more prone to yellowing and wear over the years.
You’ll still get a 10-year warranty on the bra itself, giving you peace of mind and the adhesive works even with the Arizona heat. The bra doesn’t seem to bubble much over time, but you may need to get it replaced sooner than Llumar films. Keep in mind, this will be years after the installation provided you work with an experienced installation team.

SunTek bras are among the clearest on the market and their self-healing technology works just as well as the above brands. But what sets them apart is their HydroResist coat which gives you a little extra layer of protection against stains and dirt.

This helps you keep that just-waxed gleam longer. Unlike the other brands, you’re not just limited to a glossy finish—you can choose a matte film to give your Corvette a bit of texture. This is ideal for custom paint jobs.
SunTek stands behind their films and offers a leading manufacturer’s warranty. The length depends on the specific bra you select, so if that’s a concern, speak with your installation team before you make a decision.

If you’re looking to save money on the cost of the clear bra itself, Vvivid won’t disappoint. It’s one of the more affordable options on the market. And it does work…just not as well or for as long as the other brands on the list.
It’s ideal for drivers who just want a little something extra for their cars, but don’t want the long-term investment of Llumar or Xpel films.

Vvivid gets high marks for its price point and if staying on-budget is a priority for you, it’s worth considering. But if you’re looking for longevity and a set-it-and-forget-it film, you’ll want to look at one of the other options on this list.

Which Is the Best Corvette Bra for Your Ride?

Ultimately, any of these films will work just fine. Take a look at your budget and get quotes from installation professionals. This will help you find the best film for your needs. Remember, any clear bra is better than having none protecting the nose of your car. At SmartFilm, we provide quality tinting and paint protection film installation and maintenance to residents of Mesa, Gilbert, Chandler, Phoenix, Scottsdale, and the surrounding area. Make an appointment today.