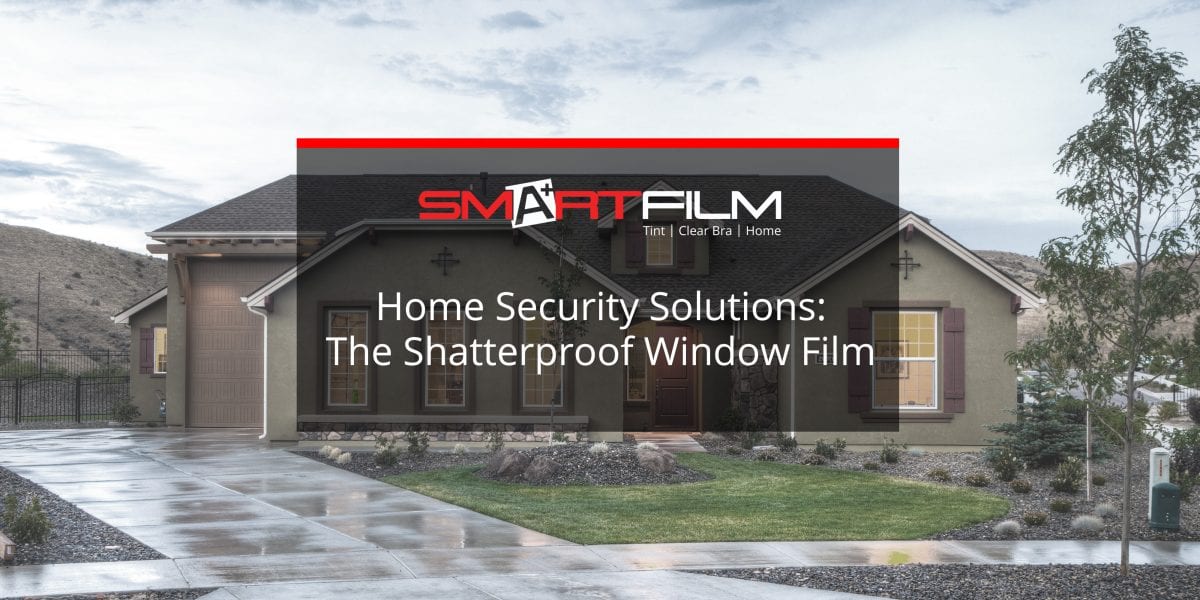 One thing that’s becoming essential for homeowners is security film for their windows. During the month of October in the year 2010, an atypical series of severe thunderstorms rattled Arizona. Extreme tornadoes went across the state, resulting in billion-dollar damages. Over one hundred commercial buildings were destroyed and thousands of automobiles and homes were damaged in Phoenix and its surrounding cities.

The state lost almost $3.8 billions worth of property and while one would hope such disasters would not come again, Americans can’t say the same thing. Being considered as the leading country that experiences destructive tornadoes around the world, they have considered natural disasters as a common thing.

And as a security measure, homeowners as well as establishment owners have made glass protection a must for their properties. They would either use tempered glass to protect their people or they would go for a much cost-efficient route of hiring window film installers and buying glass security films!

Learn how safety and security window films can strengthen both your peace of mind and the vulnerable points of your homes.

What Security Films Are

Security films — also known as safety and security films — is a type of home tint often used to prevent flying glass during natural disasters or accidents. While it carries the same feature of blocking UV rays, they are more well-known for their strength and durability.

Unlike heat controlling films, security films are made for the purpose of reinforcing strength to glass windows. It’s made up of polyester materials designed to hold your windows together during adverse conditions and often come in various thicknesses.

They often go through standard tests to ensure that each film can deliver to its promise and sometimes have other components as we’ve mentioned earlier. And because of its cost-efficient price, people love using them as a protective measure against natural disasters and even burglaries.

Just like any other home tinting films, security tints have its pros and cons. It may be really good at certain but it might not perform well in other conditions. Before you make the decision of using these films as a protection, keep these things in mind.

As mentioned earlier, security films are known for their toughness. They are often used as an added protection to homes or commercial buildings. This is aside from acting as a shield against broken glass, it even has the ability to prevent break ins!

Burglars will have a harder time breaking your windows or glass doors. They’re more likely to lose interest after a couple of attempts as the tint is thicker compared to other home films.

Because of the changing conditions around the world, commercial spaces and government sites are now proactively doing their best to protect their customers and visitors. Fortunately enough for them, security films are strong enough for blast mitigation.

Today’s home tints are designed to last during high impact situations. Should there be a prolonged blast, the film will effectively protect those inside the building.

Another great thing about these tints is its ability to keep homes much cooler. Because they are generally designed to block harmful UV rays, they can reject up to 79% of solar energy. It keeps the temperatures within your homes cooler, cutting back the need for air conditioning!

Safety and security films can easily help you save more money and become sustainable! The more energy you conserve, the lesser carbon footprints you make — which is an important thing to keep in mind especially with today’s environmentally-conscious times.

If you wanna do your part in saving the earth while spending less, this is the tint for you!

No one likes seeing their homes vandalized but unfortunately for some, it’s a common occurrence in their cities. Aside from being quite the eyesore, graffiti vandals often cost a lot to clean ups.

Luckily, you have security films— they’re a great inexpensive protective measure against vandals! Should anyone try to deface your home, you can easily remove the film and have it replaced with a brand new tint.

While home tinting has a generally positive reputation amongst home owners, there are still those who think they’re not really worth the investment.

Admittedly, the professional residential tinting can be pretty expensive. Because aside from the high quality films, you’ll also be paying the services of professional installation teams. And because security tints does not guarantee full security, some people think it’s not really worth it.

But in the defense of tinting services, a lot of people don’t realize how important proper installation is. If homeowners are to make the most out of their 3M Safety Window Films or their glass door security films, they must be installed properly.

No matter how effective a 3M Window Film is, improper installation can easily put off its effectiveness. While it’s easy to assume that home tinting is a pretty easy project — especially with the growing presence of tinting kits — things really are not as easy as it seems.

The efficiency of security films are affected by the manner in which they are installed. If they aren’t applied properly, there’s a high chance of their durability deteriorating — meaning bubbles will appear early on. The lifespan of your security films will be shortened.

That’s why, regardless of how cheap DIY tints are, drivers still recommend going to a reputable tint shop like SmartFilm! Their expert installers are constantly trained for installations. And aside from this, each service they offer comes with a guarantee!

If anything happens to your security film, you can easily contact them and they’ll be there to help you.