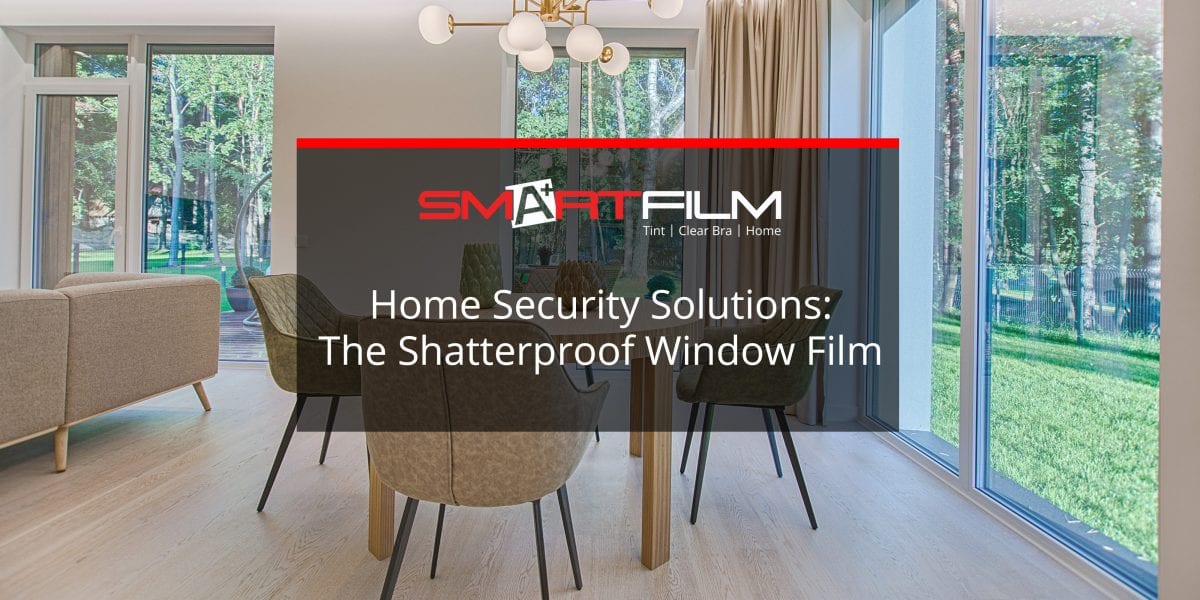 If you look at today’s contemporary homes, it’s hard to find houses that don’t feature large spans of floor-to-ceiling glass windows. And though they were primarily used in commercial construction, they are now being used to create energy efficient homes. One option on the market to help protect your windows is shatterproof window film.

Experts believe the trend can be traced back to the growing demand for greener infrastructures — homes or commercial buildings that feature energy-saving materials. And with the help of today’s modern technology, there are now energy efficient and affordable glass windows!

Undeniably, glass windows serve today’s homes very well but despite this, some people think it leaves homes vulnerable to burglaries and robberies.

Taking a look at Arizona’s crime rate during the previous years, people might think there’s no need to be alarmed. The state has an average rate of 2.97 violent crime incidents per a thousand people, a number relatively lower to that of the national average. Furthermore, the rate of robberies and burglaries have fallen over the years.

Arizona’s ranking to the National Council for Home Safety And Security or NCHSS leaves people thinking there’s nothing to worry about but experts think otherwise. While the statistics may give homeowners some peace of mind, they shouldn’t let their guards down.

Protecting people should be taken seriously, regardless of the numbers they’re seeing. Law enforcers still believe that homeowners take all the precautions needed to avoid harmful crimes like forced entry and burglaries. And one great way of doing this is by turning your windows into shatterproof glass windows!

Because of today’s technology the often used window films that protect vehicles from harmful UV rays and can now be used on homes! And depending on the type of film you use, home window tinting offers several benefits to homeowners and their families!

Depending on who you ask, homeowners tint their windows for several reasons. Some do it to give their houses an added flair with the help of decorative window films while some use shatterproof window films in improving the shatter resistance of their windows.

Whatever their reason may be, home tinting in general, helps improve homes! For instance, its heat reduction properties regulates indoor temperatures, lessening the need for air conditioning during the summer! On the other hand, its UV blocking features protects both furniture from fading and families from higher risk of skin cancer!

Additionally, certain films are made of materials that improve the shatter resistance of their windows! It ensures families that when their windows are damaged by incidents like forced entries or natural disasters, they won’t break as easily.

Undeniably, home tinting has a long-standing reputation for serving homeowners and their families well. But in order for them to be utilized to their full potential, consumers must focus on one issue alone. Each type of home tint available in the market specializes in solving specific concerns of homeowners. If they want to keep their homes feeling and looking cool, they have solar films and if they want to give their houses a little personality, they have decorative films.

Shatterproof window films are resilient, transparent films made up of multiple, micro thin polyester that holds broken glass from shattering or falling off its attachment systems. It is one of the more common safety and security films in the market that focus on strengthening glass windows.

Just like some of its predecessors, shatterproof films have a great reputation. It’s known to be used as one of the several precautions the US Government takes in strengthening the defenses of their infrastructures against terrorism threats. So if contemporary homeowners want to improve the use of their floor-to-ceiling glass windows, shatter resistant films are great materials to use.

Aside from protecting families from violent crimes like burglaries and forced entry, they are also known to be great protectors during natural disasters. Strong typhoons can threaten the vulnerable parts of a home and without protective films, a single square foot of glass can create up to 200 sharp shards of glass.

Because of how easily comparable home tinting is to car tinting, some homeowners think they can easily turn it into a DIY project. While there are now tint kits easily accessible to them, it doesn’t mean it’s a highly recommended manner of installing shatterproof films.

Safety experts believe that in order for the films to truly be effective, they must be installed using the appropriate techniques and tools. Improper installation affects the overall effectiveness and longevity of films. Hence, it’s best that homeowners seek the expertise of installation teams like the ones in SmartFilm!

Admittedly, professional installation might cost more than buying pre-cut shatterproof films but it’s a great investment that’s guaranteed to last for a very long time! If you’re worried about its rate, don’t be afraid to schedule a date with our team and we can discuss cost-efficient packages for your homes!