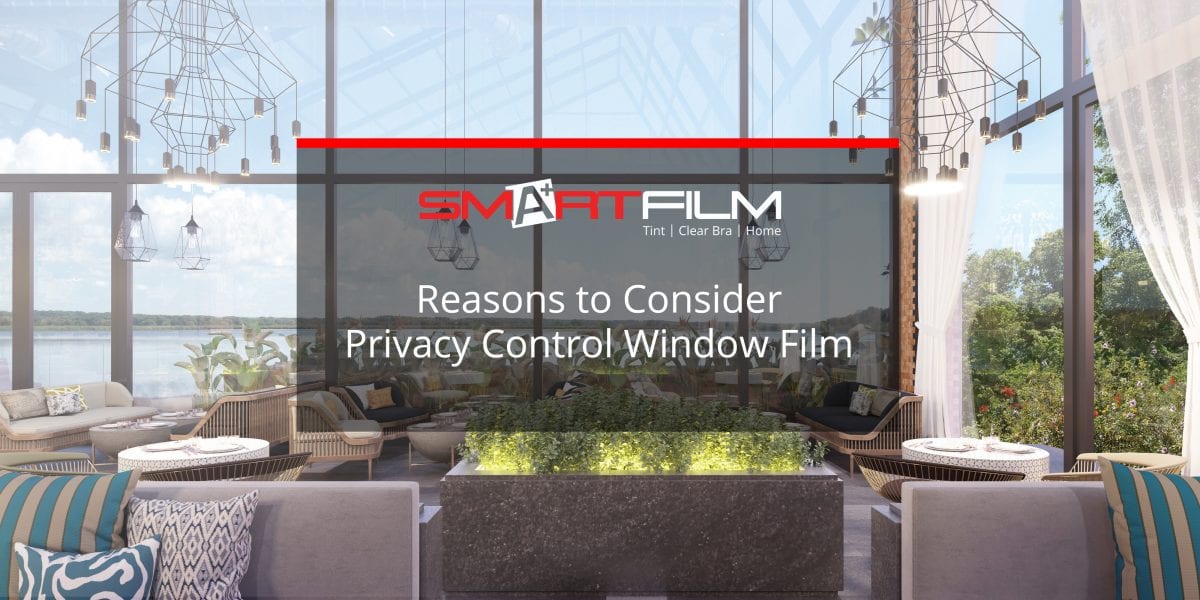 Making your building feel like yours means finding ways to put your personal touch on the décor and design. While window tint can help make the space feel more comfortable, you may not always like the idea of standard dark tints. They’re impersonal and only make sense when used on exterior windows. For interior windows, mirrors, and glass panels, privacy control window film makes the most sense. Here are a few reasons to consider using this type of static cling privacy window film at your home or business.

Privacy control window film may increase privacy, but that doesn’t mean it makes windows look like boring dark panels. Instead, the film can make your windows look more decorative and can turn them into a work of art that draws the eye. Choose between unique patterns or add smaller panels of film to break up the look of the glass. The options are nearly endless.

For business owners, this can help set your building apart, making your space seem elevated and classy. Add unique designs with frosted static cling privacy window film and turn your interior windows and glass walls into a unique eye-catching work of art.

Window glass privacy film works by making the window look frosted. This means people can’t see what’s happening on the other side of the glass clearly. But it doesn’t mean the room will be dark. Instead, the privacy control window film lets natural light into the space.

This means the room will feel both secure and welcoming at once. It’s the perfect option for glass walled offices or shower enclosures where you want to take advantage of natural light during the day. You won’t have to worry about feeling “on-display” or have to rely on artificial lights to keep the space well-lit. That said, you can also use the film to add privacy to home entryways or to diffuse that harsh morning light that makes your kitchen uncomfortable when you first wake up.

Static cling privacy window film adheres to your windows without any adhesive. This means it’s easy to remove when you no longer want the film or when the film gets damaged and scratched. Even better, it acts as a protective buffer for the glass itself. The film will take the brunt of the damage, leaving your glass in pristine condition. Once you remove the film, all you’ll have to do is give the window a good cleaning with a dedicated glass cleaner.

Accidents happen and sometimes, those large panels of glass inside your building get bumped into and broken. When this happens, that shattered glass can spread across the room, making it incredibly difficult to clean up the space. Worse, you’ll end up finding shards for months after replacing the glass panel.

Window film helps hold those glass panels together. Instead of shattering, the film keeps the shards in place, making it easier to clean up and remove the damaged panel in the first place. Keep in mind that decorative window glass privacy film won’t make the glass more resistant to impacts. If that’s your goal, you’ll want to invest in security film.

It Will Save You Money

The average homeowner pays more than $104 for electricity each month. That number is almost always higher for businesses. But privacy window film can actually help you lower your energy costs each month. How? By allowing natural light into the room.

The more natural light you get in the space, the less you’ll have to rely on your electric lights. Over the course of the year, you could end up saving hundreds on your energy bill.

The Right Film Can Make Your Home Safer

Break-ins are a major threat for almost every homeowner and business. When they happen, you not only have to worry about replacing the items that get stolen, but you also have to pay for the cost of repairs to fix any property damage caused by the thief.

The right privacy film can make even your exterior windows safer. We’re talking about mirror-finish window tints. These provide a solid barrier during daylight hours, making it almost impossible for people to see inside your building. This helps keep your belongings and equipment safer whether you’re on-site or away.

Privacy Control Window Film Is Well Worth the Investment

No matter what type of window you’re planning on tinting, privacy control window film is a great option. It gives you privacy without diminishing the amount of natural light you love and rely on. It’s perfect for both businesses and homeowners alike and can be used both on interior and exterior windows without issue. The only limit is your imagination and your creativity.