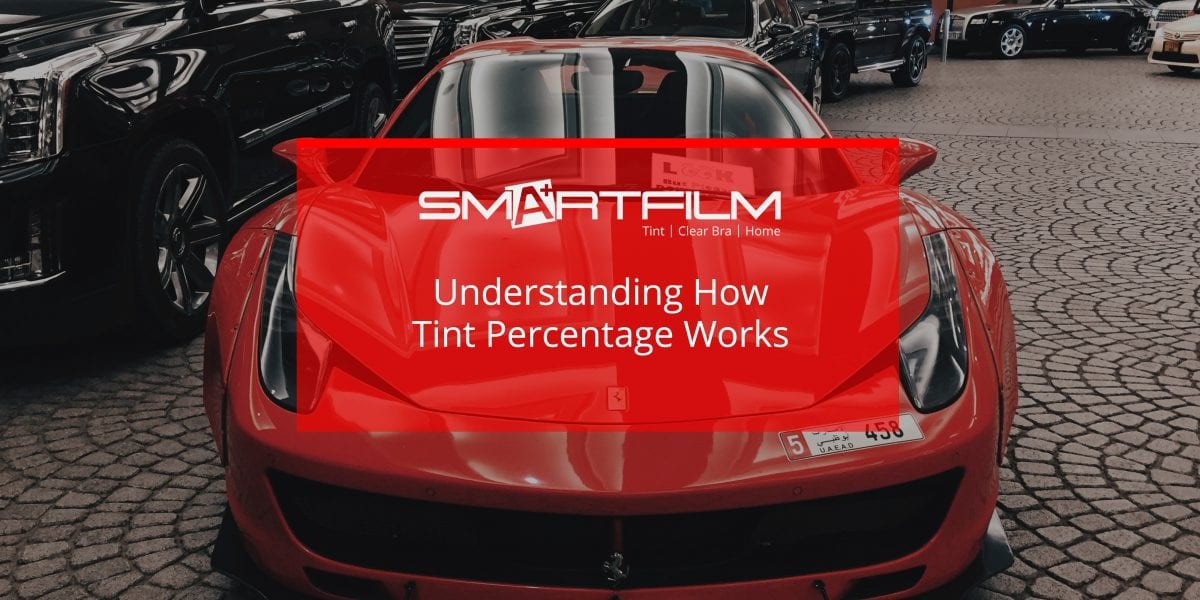 Installing window tinting film on your car is a great way to improve the comfort and quality of your ride. There’s an option for every car and every budget, but finding the right film is only the beginning. You also need to choose the proper car tint percentage for the film before you can have it installed.

Choosing the right percentage is key—you want the windows to be dark enough to be comfortable but light enough to not change your visibility and in order to do that, you need to know how does window tint percentage work.

What Tint Percentage Is For Car Windows

Window tint film darkness is ranked in percentages rather than specific colors, shades, or types. Strictly speaking, the percentage of the film correlates to the amount of light that the film lets through the windows. The higher the car tint percentage is, the more light it lets in.

For example, a tint film with a percentage of 90 will be almost completely clear. On the other end, a tinting film of 20 percent will be nearly completely black.

Different tint percentages are consistent across different brands and for good reason: the percentage determines the legality of the window tint. If it’s too dark, you can get in trouble with the law and it all depends on where you live and where you’re driving.

How Tint Percentage Works with the Law

It should come as no surprise that the law wants to cap the darkness of some films. That’s why they make it illegal to install lower percentage films on your front windows. This is both for your safety and the safety of those around you.

You need to be able to drive with complete visibility. Otherwise you won’t see hazards on the road and could end up causing serious accidents that threaten your safety as well as the other drivers and pedestrians nearby.

Strictly speaking, you’re allowed to install window tint film that lets more than 33 percent of light into the car on the front windows. This is more than enough to keep you comfortable on the road. But it’s light enough to keep you from losing your visibility. Your rear windows can be any darkness.

Keep in mind that different states allow different tint percentages on cars. If you’re planning on moving, make sure your window tint works with your new home state’s restrictions. If not, you may need to replace it with a different film or remove it altogether.

But if you’re just looking to block UV rays to keep your skin healthier and reduce the risk of premature aging, you may not need a darkened film at all. A clear film will do the job perfectly without altering the way your car looks from the outside.

Think about how you plan on using the car in the first place. Then, think about how much you’re willing to spend on the film itself. Dyed tints are the most affordable option, but they won’t last as long and are prone to fading after a few years in the hot Arizona sun. Metallic and ceramic films are much more durable and more effective, but they do cost more.

When you order a film online and install it yourself, you never know what type of quality you’ll end up getting. Worse, the tint percentage may not always be accurate, putting you at risk for tickets and legal trouble if it’s too dark.