How to Tint Car Windows: A Step by Step Guide

Home Window Tint How to Tint Car Windows: A Step by Step Guide 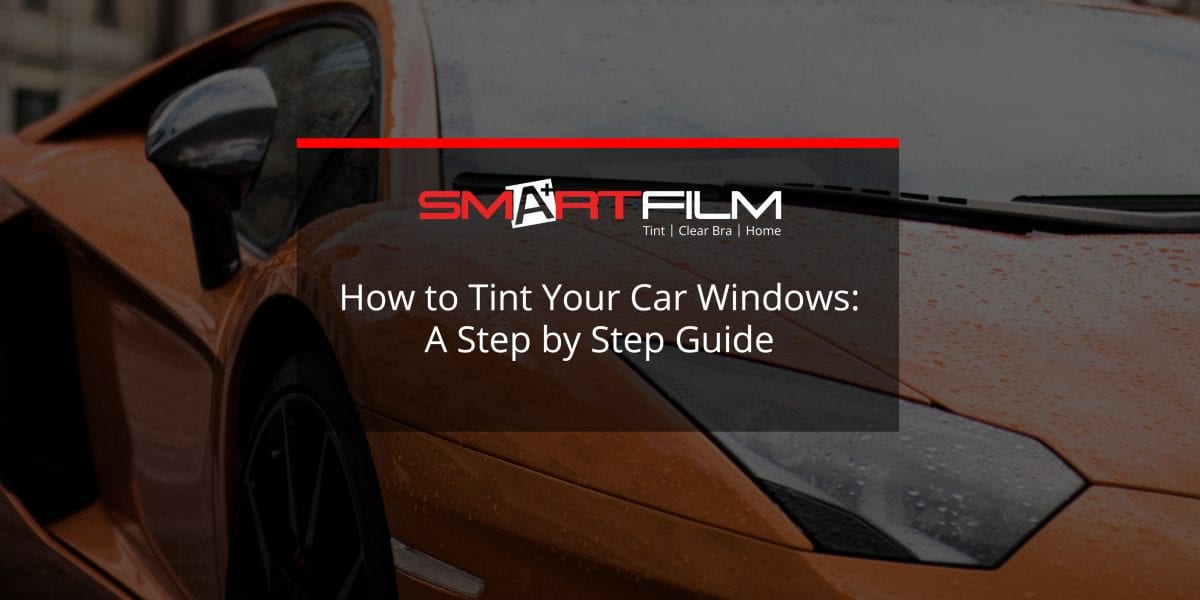 How to Tint Car Windows: A Step by Step Guide

When car owners think about improving their cars, they often think about getting their windows tinted. Car window tinting helps car owners like yourself keep their vehicles cool and maintain their upholstery in great shape. Hence, it should come as no surprise that most people choose to take their cars for a tint job — but this doesn’t mean you have to.

You can now tint your car windows on your own within the comfort of your garage or driveway.  In light of car tinting becoming a common practice, pre cut window tint film can now be purchased. More and more car owners are now tinting cars on their own. If you’re a fairly new driver, you’re probably wondering how to tint your car windows.

If so, here’s a simple guide on tinting car windows by yourself.

Before you can start the installation process, you’ll have to choose the right tinting film for your car — and there’s more to it than picking the first film you find.

First thing to remember is that the tint needs to be legal based on state laws — meaning it can’t be so dark as to interfere with law enforcement’s ability to see you behind the wheel. In Arizona, this means your windshield must be completely clear and your side windows should allow at least 33 percent of light inside.

The window tint brand is also something you’ll have to think about when choosing window tint film. There are hundreds of brands and manufacturers out there, with some offering DIY window tint kits. Moreover, you’d also have to think about the features you want your film to have. Whether you want a type of  tint that has protection UV rays or one that reduces glare, each kind of film has different characteristics unique from other kinds of tints.

Afterwards, you’ll have to think about just how much tint film you’ll need.

The next step would be to find a way to clean your windows as thoroughly as possible for it to be dust free. With this purpose in mind, simple all-purpose cleaners aren’t the best choice as it can leave residue that can interfere with the film’s ability to stick to the window itself. The best way to go about it is to use a dedicated glass cleaner or dish soap and water compared to all-purpose cleaners.

Wash both the top of the window and bottom of the window inside and out, then wash them again. After that, you’ll want to do this at least three times on each window that you’ll be tinting. The adhesive could have difficulty in due to any small amount of dust and debris on the glass. The film could also end up with air bubbles under those circumstances.

How easy is it to tint windows on your car? Well, that largely depends on your accuracy when measuring and cutting the film. Before you can start applying tint, you’ll need to measure each window that you’re going to tint.

Grab the roll of tinting film and lay it over the outside of your car’s window — make sure to spray the window down with water first. This will make shifting the film into the right position easier.

Cut the film off the roll along the edge of the door and you’ll be ready to cut. Grab your knife, straight razor blade, or clean and unused box cutter, then cut the film along the window lines and remove the excess. Now you’ll have a sheet of tint over the glass.

Once you’ve got your film sized, you’re ready to start installing it. The key to how to tint your car windows at home successfully is to take your time.

First, prep the inside of your car window by washing it again with water. Roll the window down half an inch to make the rest of the task easier. Make sure to get rid of any dirt and grime inside the window seals now.

Once you’re done, squeegee the water down off the window then remove the adhesive backing from about half of the cut piece of film starting at the bottom edge of the window.

Lay it on the glass and smooth it out as you lay the film on the rest of the window. Using your hands is fine at this stage. Once your cut piece covers the full pane of glass, cut off any excess film remaining. If you measured correctly, you’ll still have a little extra to cut away.

Smooth The Tinting Out

No matter how careful you are laying the film on the glass, you’re going to have air bubbles — even pros won’t get the film on completely smooth right off the bat. But this does mean you’ll need to smooth the film out before you can call it a day.

Grab a spray bottle and fill it with some hot water. Then spray the hot water over the film. This will make it more pliable and speeds up the smoothing process. Should you have a heat gun around, make sure to use it to get rid of any other bubbles.

Using a hard plastic smoothing card or squeegee, push the bubbles in the film towards the edges of the window. This process gets rid of the air trapped between the window and the film.

Once the film is completely smooth, you’re ready to move onto the next window.

So, How Easy Is It to Tint Car Windows?

Ultimately, window tinting takes time, patience, and a steady hand. If clean your windows, cut your window film accurately, and take the time necessary to smooth the film out, you shouldn’t have any problems.

However, this is something that is easier said than done. That’s why most people end up just opting for professional installation because they know it will get the job done right and save them time. For residents in Mesa, Gilbert, Chandler, Phoenix, and Scottsdale, SmartFilm provides quality tinting installations for every type of vehicle. Give us a call today to get a quote!