Can You Re Tint Car Windows on Your Own?

Home Window Tint Can You Re Tint Car Windows on Your Own? 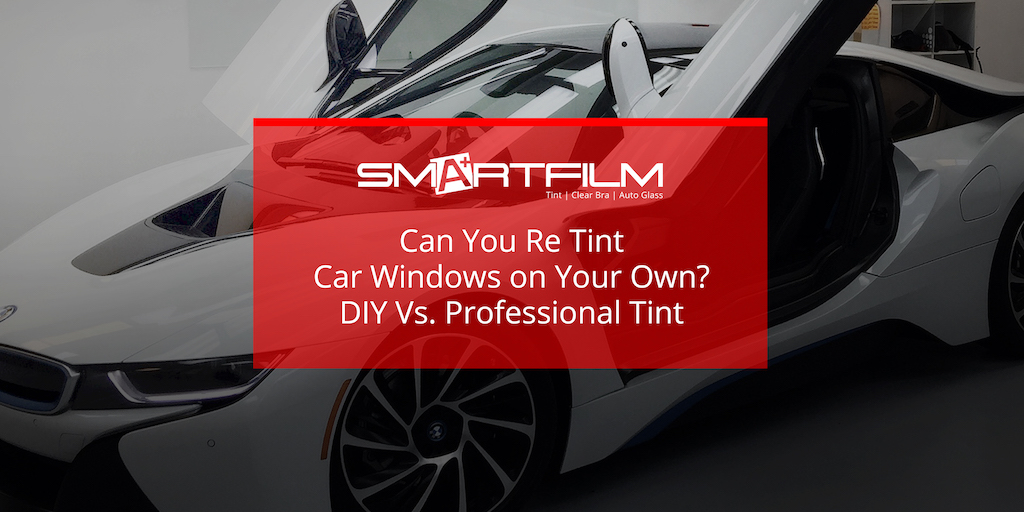 Can You Re Tint Car Windows on Your Own?

Window tinting lasts for years with proper care and maintenance, but eventually, you’ll have to replace the window film installed on your vehicle. Soon enough, you’ll be asking the question; can you retint car windows?

Generally speaking, you can, but you’re going to decide between doing it yourself and bringing your car into a shop for some tinting services. There are pros and cons to both, but before you make a decision, let’s first discuss why and when you should retint!

As we’ve mentioned earlier, while films are meant to have a lifespan of at least five years depending on the type of tint, window films are bound to be damaged sooner or later — either from harmful UV rays or road debris. And while one might think they can be easily repaired, window films are too thin or delicate to do so. It’s either you have them replaced entirely or not.

Additionally, due to the transparent or colored nature of certain films — for example, dyed film — patching certain areas is impossible. There’s a high chance of your window looking lighter or darker in certain places if your initial layer happens to be darker than the new one.

Ultimately, retinting is the only way you can maintain that extra protection for your vehicle. And now that we’ve talked about its whys, let’s discuss how will you know if your film needs replacing?

Generally, there are three telltale signs to watch out for when it comes to checking the health of your tinting; air bubbles, fading and peeling.

Bulges or air bubbles are bound to appear later into your tint’s lifespan. But if they appear a few years earlier than expected, there’s a high chance that it wasn’t installed right or the film wasn’t of high quality.

Whatever the reason may be, air bubbles is a clear indicator of an already damaged tint. Not only are they quite the eyesore, they’re likely to cause more issues in the long run and should be addressed as soon as possible!

Over time, tint films are anticipated to change its color or fade. This is because prolonged direct exposure to the sun will eventually affect your tints.

Fading is anticipated to happen over time but those who have higher quality materials like ceramic tints maintain their color longer. So once you’ve observed noticeable color changes, it’s time to think about retinting.

For some car owners peeling in corners of their tints is their number one signal for replacement. Once they see that the adhesive starts to lose its grip, they immediately start planning for a new tint job.

Those who know their tint kits well understand that peeling films is no easy task. While it may be tempting to just rip the entire thing off, it poses great damages to the windows. Hence, experts suggest looking for a window film removal service if you really want to replace them.

Can you re-tint car glass on your own? Absolutely. Should you? That’s a separate question altogether.

When you re-tint the windows, you have to safely remove the old film, getting rid of the original adhesive without scratching the glass itself. Once you’re done, you’ll need to measure and cut the film as close to the actual window shape as possible.

And after this comes the painstaking task of installing it without bubbles and imperfections. Again, this is doable, but time-consuming and meticulous.

Furthermore, you’ll be forced to pick between limited variations of tint kits. And while these films are functional, some of them are not of high quality. They’ll need to be replaced sooner and may not provide the protection you’re looking for.

Ultimately, if you find yourself the question; how much to retint car windows by yourself, the answer is most likely expensive.

When you hire a pro to re-tint your vehicles, you’re setting yourself up for a faster turnaround time and a better quality job. Not only will you have access to industry-leading films, but you’ll also have an experienced professional removing the old film and installing the new film for you. This means a flawless application process and less maintenance down the road.

Yes, you will pay for the installation, but you’ll save time and guarantee that the job is done right in the first place. As an added bonus, you’ll have someone to turn to if the film starts looking worn or gets damaged in the course of your daily drives.

Ultimately, the choice of tinting is yours. Can you re-tint windows on your own? Yes, but you’ll spend hours on the process and might not get the best film for your car. You may even end up damaging your car’s window tinting further in the process.

By hiring a professional member of an installation team, you’ll guarantee that the window tinting is done right from the get-go. And should you need help or discover a flaw in the tint, you won’t be on your own. Contact us today for a free estimate on tinting and see how we can help you with your windows.