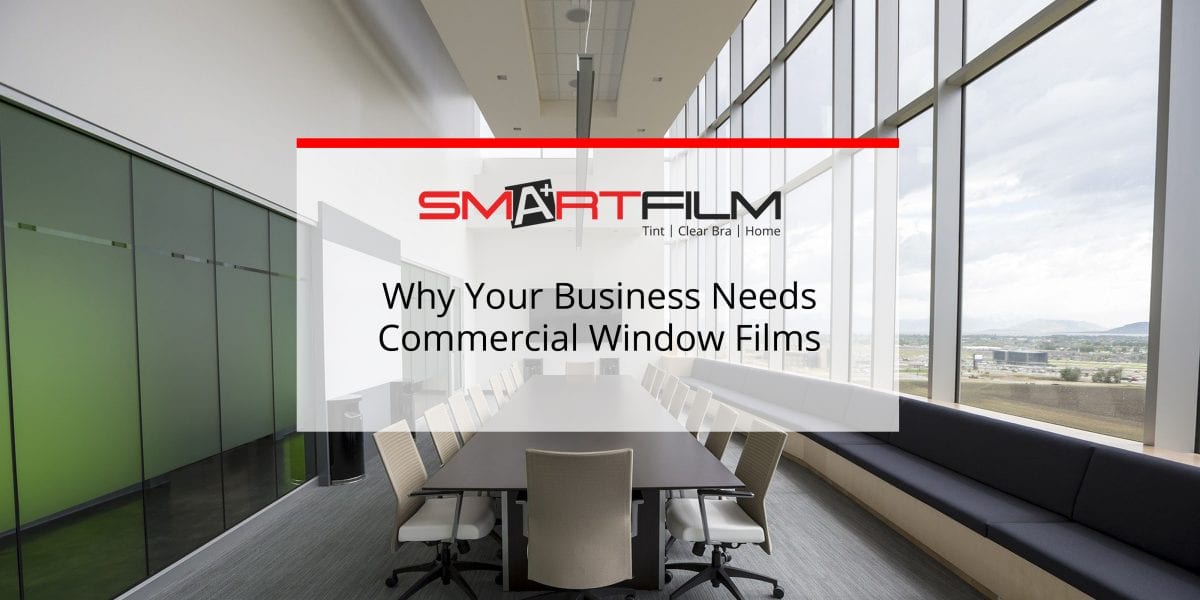 For most people, window tinting is nothing else but a way of improving the aesthetics of a vehicle or a home. Most car owners would tint their vehicles to catch the eye of anyone who sees it, while homeowners who purchase decorative window films do it to give their homes a personality.

Undoubtedly, a lot of business owners think their commercial buildings will fare pretty well without commercial window tinting — but this is not entirely true. Unlike the common misconceptions that tint films are just for artistic purposes, it actually possess several benefits for commercial properties!

If you’ve been wondering whether your business’ office should have its windows tinted, we’re here to discuss the different advantages and kinds of commercial window films.

How Window Films Save Commercial Properties

Business owners often wince upon hearing the process of commercial window tinting. Admittedly, window tinting can be a bit costly depending on several factors — the type of commercial tint to be used, the size of the building, and the installation itself.

Hence, it’s understandable why most of them have second thoughts on spending their hard earned money on something they don’t truly understand. With this in mind, we’ve listed down some of the benefits of commercial window film!

Architects and engineers spent almost half of their lives learning how to plan and build commercial properties that are safe and secure. Despite this, some parts of a commercial building tend to be more vulnerable than most — glass windows.

One of the many reasons why both car owners and homeowners get their windows tinted is to improve their safety and security. While it may be true that most window tints are for appearance purposes only, it can actually keep you and your employees safe.

Commercial window tinting strengthens your commercial windows further so that it remains in place should it be compromised. Aside from this, it can also increase the privacy of a room — lessening the chances of burglaries.

here are specific types of window tinting like security films that focuses on this concern entirely. By tinting your commercial windows, businesses are ensured that their company and their people stays safe.

While the heat may seem like it doesn’t pose much of a threat for employees, the same thing cannot be said for those in hotter regions like Arizona. It heightens the risk of skin cancer due to harmful UV rays and increases energy bill due to frequent air conditioning.

Luckily, commercial window tinting can help you avoid both consequences! Window films have the ability to reduce the amount of UV rays that comes to your offices and can keep them either cool or warm depending on the seasons.

For instance, your company will spend less on energy costs because there would be less of a need for air conditioning. And during the cooler months, it’ll help keep everyone warm — lessening the need for using furnaces.

Admittedly, redecorating an entire office will cost a lot but a great way businesses can save money is by looking into decorative window films!

Commercial window tinting can help you build great looking offices without breaking the bank. Decorative commercial window films have a wide variety of designs, colors, and patterns you can choose from. Another key point to keep in mind is that this type of film can be cut into different shapes and sizes — making the perfect material for decorating!

Now that you’ve seen how commercial window films save offices, it’s only apt we discuss its different types.

Depending on your commercial building’s needs, you’ll need to pick out a specific type of film!

This type of commercial tint provides commercial buildings with a degree of control over the heat of the sun, glare, as well as the harmful UV rays mentioned earlier.

Reflective films will give a shiny, silvery and mirror appearance from the outside. Companies looking for affordable tints that provides some class to their commercial properties, this is their best bet.

Those hoping to find tints that will allow them to keep their employees safe from the unwanted summer heat, deluxe window films are the right choice.

It has extremely high levels of heat rejection and could enhance the overall comfort of your indoors. Additionally, it offers glare reduction and a non-reflective appearance from inside and out.

Those who want to gain all the solar benefits while maintaining the quality of their indoor light can opt for neutral window tints.

These commercial window tints will still protect you from the sun’s UV rays and its glare without changing the appearance of the windows or the quality of light that comes through your offices.

Just like normal window tinting services, commercial window tinting is a complicated and meticulous process. And for clients to make the most out of the films they’ve purchased, they should be installed by professionals.

While it may be true that professional installations can cost quite a lot, businesses a guaranteed to save more than they spent starting with the great energy savings commercial window tinting creates!