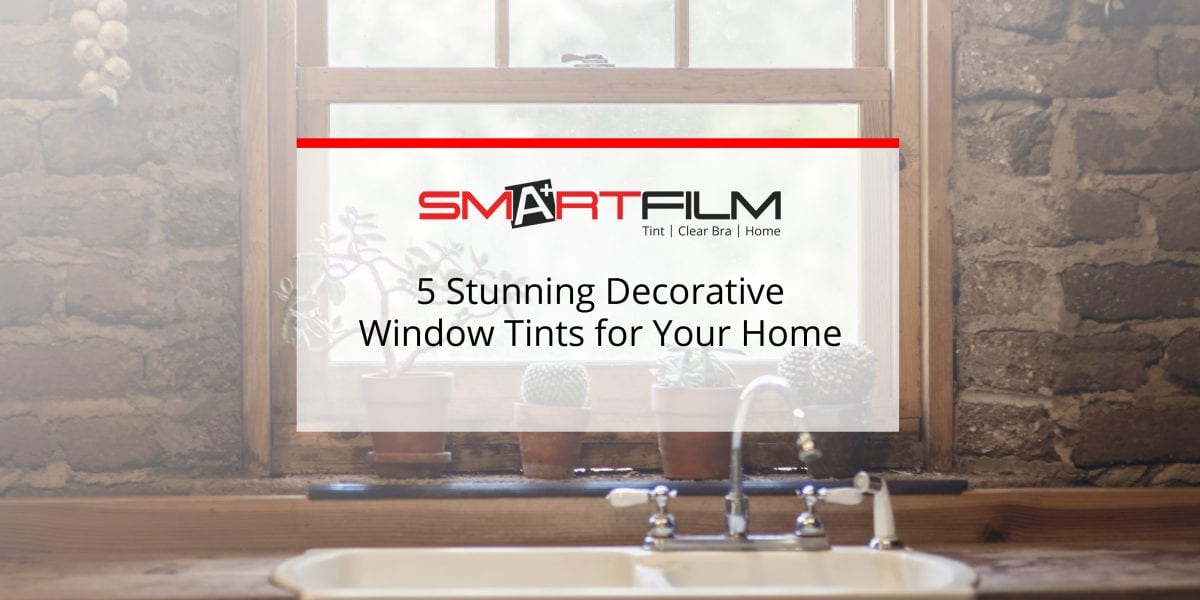 When it comes to decorating your home, your thoughts probably drift towards paint colors and artwork — and they’re quite great methods!. Unfortunately for us, they can’t do anything for the glass surfaces in your home. If homeowners wanted to alter their glass windows and doors, they need a different approach.

Hence, decorative window tints! Residential tinting is one wonderful way of adding more dimension and flair to them. Today’s technology has resulted in a wider variety of decorative films, providing homeowners with endless options!

But choosing the right film for your aesthetic can be more daunting than just painting the walls. So in hopes of helping you out, Smartfilm has listed five fantastic home window decorative films to consider installing in your home!

Frosted decorative tinting is perfect for adding a light coating of frost on glass surfaces. It’s a great option for those hoping to find decorative window film for privacy as it partially obstructs the view from the outside. Furthermore, it can easily be used to create unique patterns without blocking too much natural light. As a matter of fact, the window film creates a soft glare in the morning.

It’s really up to the homeowners how or where the window film will be added. But more often than not, it’s used as a decorative window tint for doors in the shower and other enclosures. Ultimately, people can never go wrong with frosted tints!

Inspired by decorative fabrics, textile window films incorporate patterns and other textures into itself so that it can be used in windows and other similar glass surfaces. Most homeowners use this specific type of tint in common areas where they can easily be shown off.

While its patterns make great accents, they also increase privacy. They can easily be applied on shower enclosures and other glass panels. Frankly speaking, they can easily be used almost anywhere at home. It’s really up to the home owners which area needs more flair or more privacy.

Homeowners who wish to only tint one side of their glass surfaces, they don’t really need to worry. Gradient film makes things much easier by creating a true gradient by starting out completely frosted and gradually fading into natural glass.

Experts suggest that homeowners decide which part of the window they want frosted before they proceed with the installation. While they can be used almost anywhere, they are commonly installed on large window walls, sliding glass doors, room partitions and even kitchen backsplashes.

And though the tint is well known for increasing privacy, they can also be used decoratively. Try adding gradient film to glass shower enclosures to create depth and visual impact.

Decorative home window tinting film has a reputation for being rather boring. And it’s completely undeserved. Believe it or not, tints come in all sorts of colors — it’s honestly all about choosing the right tint. Colorful specialty film lets you transform any glass window, door, or surface into a color-filled panel.

Use it to make a certain feature stand out or install several colors to create a stained glass appearance on your upper windows. The only limit is your imagination. Why choose colorful specialty films instead of stained glass? It’s more affordable and can easily be removed in the future!

You could pay thousands for a colorful shower enclosure if you choose to install colored glass. But if you stick with film, you’ll save hundreds and can always remove the film if you’re worried about the way it impacts your resale value down the line.

Bring a bit of nature indoors with nature print home window decorative films. These films mimic the look of etched glass, letting you create a custom design anywhere in your house. Like other films, they can increase privacy, but their main function is to add texture and personality to any piece of glass you apply them to.

They’re particularly great for breaking up large walls of glass, adding texture to entryways, and even creating unique borders on mirrors. But you can always keep things simple. They make a fantastic addition to any glass shower enclosure.

Are Decorative Window Tints Right for Your Home?

Decorative window tints for your home can work with almost any existing sense of décor or design. And they can be applied to almost any glass surface. It’s just a matter of deciding where you want to install the film and what type of look you want to achieve.

Furthermore, it’s a cost-efficient option for those who want to reinvigorate the look of their homes without breaking the bank. And as we’ve mentioned earlier, the films have added features such as increased privacy and shatter-resistance that makes it worthy of your investments!

There’s no right or wrong answer and the film you choose will give you a look that’s completely unique to your house and your sense of style. If you’re looking for a decorative window tint for sale, Partner with the experts at SmartFilm! We’re the leading source for residential window film in Phoenix, Scottsdale, Mesa, Gilbert, Chandler, and the surrounding area.